If you are looking to travel from Lagos to Ibadan by train or from Abuja to Zaria or Kano by Train, here is a breakdown of the Train Fare, Requirements, and all you need to know before embarking on the journey.

The Lagos-Ibadan rail line is a double-track standard gauge rail, the first of its kind in West Africa. It is the first part of a new 2,773km Lagos-Kano standard gauge line. The newly introduced train provides fully air-conditioned train services.

Requirements to Travel from Lagos to Ibadan by Train

Price of Ticket Fare for Lagos to Ibadan by Train

Below is the timing for the train depature on weekends and weekdays for Lagos to Ibadan by Train. 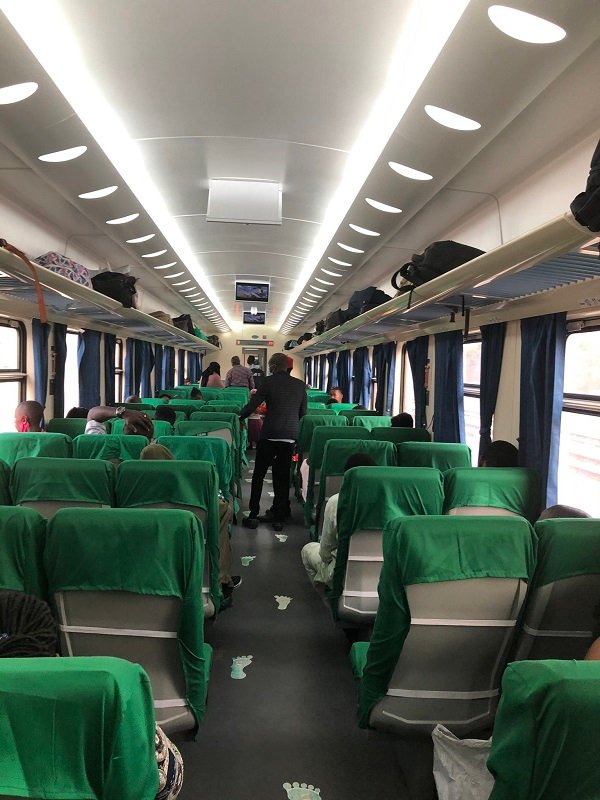 Tips about Travelling from Lagos to Ibadan by Train

1. The train departs from Chief Obafemi Awolowo Station, Moniya, Ibadan at 8:00 am and arrives at Mobolaji Johnson Station, Ebute Metta, Lagos State at 10:41 am.

3. The train has only one coach for the First Class, there are two coaches available for the Business Class.

4. The new service is operating on a limited schedule with just two trains a day but will expand to 16 daily departures once construction on stations is complete.

6.There is also 5 minutes stopover at Prof. Wole Soyinka Station, Laderin, Abeokuta. Travelers going to Abeokuta will alight and while those going to Ibadan/Lagos will also join the train.

7. In Lagos, the place to board the train is the train station at Alagomeji bus stop, Yaba. It is an old building.

Direction: Go on the road from Ojuelegba through Tejuosho to burst out at Yaba. Once you get to the end of tejuosho road, turn right and just keep going down like you are going to the end of the road. Keep looking at your right where you have the BRT lane, you would see Alagomeji bus stop. Right next to the bus stop is the entrance to the train station.

8. The train station in Ibadan is at Moniya. It is a 10 minutes drive from Ọjọọ main park in ibadan, and about 20mins to Iwo road park (if there is no traffic).

9. It is also important to arrive at the train station at least 30 minutes before departure time. This is to allow you have time to purchase tickets and register.

Transport Fare from Imo to Lagos | Price of Owerri to Lagos by Bus or Air GIG, Peace Mass