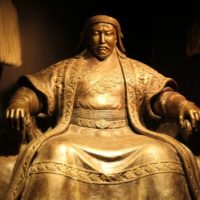 Most people talk about the most brutal and murderous leaders in history and they are quick to just mention dictators like Mao Zedong, Idi Amin Hitler, and Stalin. However, going a little back, before any of them came to power, Genghis Khan and the Mongols permanently reshaped an enormous portion of the world, and changed the culture and genetic makeup of the region forever through his military and political wisdom. Without any doubt, it was Genghis Khan who was responsible for a lot more killings than Hitler and Stalin.

Genghis Khan who was born in 1162 and died on the 18th of August, 1227 rose from humble beginnings to establish the largest land empire in history. He was known majorly for uniting the tribes of the Mongolian plateau and conquering a large portion of central Asia and China. His descendants expanded the empire even further, advancing to Poland, Vietnam, and Korea. Through brutal military force, he amassed one of history’s greatest armies and built the largest contiguous empire the world has ever seen. At their peak, the Mongols controlled between 11 and 12 million contiguous square miles, an area about the size of Africa and built a vast empire by vanquishing rivals, making strong allies and giving a level of tolerance to his subjects. Many people were slaughtered in the course of Genghis Khan’s invasions and for this reason, he is usually remembered for his brutality and a few significant contributions to humanity in his time. Genghis Khan died in 1227 during a military campaign against the Chinese kingdom. There are still a number of unanswered questions about his place of rest.

10 Shocking Facts About the Genghis Khan You Never Knew

10 His Death And Burial Is Still a Mystery

Among the numerous controversies surrounding the Genghis Khan’s life, one of the questions not answered is how he died and was buried. Some traditional stories say he died in 1227 from injuries which he sustained in a fall from a horse during a battle with enemies. Other sources say he died from an ailment while others say he died from an arrow wound in the knee. One of the more questionable accounts even claims he was murdered while trying to force himself on a Chinese royalty. Whichever way he died, the Genghis Khan made it a point of utmost importance to keep his cause and place of death a big secret, even onto this very day. This was done through the help of his most trusted soldiers.

But all we know for sure is that before dying, Genghis Khan divided his empire among his sons but as custom made clear, it remained the joint property of the entire imperial family who, along with the Mongol aristocracy, constituted the ruling class. No precise location of his burial can be traced to this day but sources say he was buried in the mountains of Khentii, Mongolia where he was born.

9. His Memory Was Recently Threatened

In the 20th century, the existence of the Genghis Khan and the Mongolian nationalism were greatly threatened. In the era of Soviet rule, the people were banned from mentioning his name. The Soviet Union actively persecuted Mongolians interested in the life of Genghis Khan. This ban was also in line with a political plot to wipe out traces of Mongolian nationalism. They further tried to scrap his memory by removing his story from school textbooks and forbidding people from making pilgrimages to his birthplace in Khentii.

But even in his death,  Genghis Khan still puts fear into the hearts of powerful governments. In 1990, this plot failed after the Mongolians won independence and Genghis Khan was restored to Mongolian history. He has since then been reoccurring in their popular culture. His name is currently used in one of the nation’s main airport in Ulan Bator and his portrait appears on the Mongolian currency.

How to Drastically Improve your Creativity Skills

8. He Had A Hand In The Deaths Of Over 40 million people.

It is completely impossible to clearly state the number of people who were slaughtered during the Mongol conquests, but history puts the number at somewhere around 40 million. The deaths of his enemies were usually very brutal and horrific. His goal was to make an example of conquered cities so as to impel other cities to surrender. Records from censuses in the middle age show that there was significant depletion in China’s population by tens of millions during the Genghis Khan’s lifetime. Another amazing discovery about the Genghis Khan was his mode of execution of his enemies. He once had molten silver poured into enemy leaders’ eyes and ears. Also, he usually captured enemies and used them as body shields in combat.

7. He Loved Getting His Revenge

Right from his childhood, the Genghis Khan enjoyed serving the cold dish of revenge to whoever stepped on his toes. His entire life story full of kidnappings, bloodshed, love, and revenge. When he was a child, his mother catered for four of her own children and two stepchildren. From a young age, the children were taught to fight and kill for what he needed to eat. This usually caused a form of dispute between Genghis Khan and his stepbrother who was also about his age.

They once had a very serious argument over some game Genghis had killed  and the news reached Genghis mother. Shockingly, Genghis’ mother sided his stepmother and this got him angrier and even jealous. Genghis patiently waited till his half brother was minding his own business with no idea what was coming, killed his half brother with his bow and arrow.

Generally, Genghis Khan preferred to offer opponents the chance to submit to his rule without a fight and become vassals by sending a tribute, accepting residents, contributing troops and supply. He guaranteed them protection only if they abided by the rules set forth but in cases when these kingdoms resisted the Mongol Empire, he released the sword against them. In the 13th century, he plotted an act of very cold revenge on the Shah of the Khwarezmid Empire who broke a treaty with the Mongols. Genghis had offered the Shah a valuable trade agreement to exchange goods but when his first messengers were murdered, the angry Khan responded by declaring war against the Khwarezmid territories which left millions dead and the empire in utter ruin.

6. He Made Tough Enemies Close Friends

Genghis Khan had a strong love for his tough and troublesome enemies. He usually drew them to himself, made them friends and promoted them to officers and generals in his army. He exhibited this beautiful skill during a battle against the Taijut tribe.

During the war, Genghis was shot at with an arrow but luckily for him, his horse was injured and not him. When the war was later won, he demanded to know who was responsible and spoke to the Taijut prisoners. One soldier bravely stood up and admitted to being the shooter. Being amazed by the archer’s boldness, Genghis Khan made him an officer in his army. He later became one of the Mongols’ greatest field commanders.

Genghis Khan also imposed a much more efficient social and military structure. This, like the Chinese historians described, allows him to command his regiments like his arms, while regiments command companies like elbows and companies command squads like fingers. So there was little or no room for defiance and rebellion.

5.  He Accepted Other Religions

One common thing about emperors and ancient rulers was their intolerance for other religions. He was actually different in the sense that he embraced the diversity of his newly conquered territories. Despite his belief in spirits of the sky winds and mountains, he declared religious freedom for all and exempted places of worship from paying taxes. He freely welcomed Nestorian Christians, Buddhists, Muslims, and other animistic traditions.

Apart from his personal interest in spirituality, his act of tolerance was a political move to keep his subjects happy and reduce any chances of rebellion.

4. Communication Was His Greatest Weapon

During his reign, he built a network of extremely vast communication across the empire. This was made possible by the introduction of a postal and courier service system called “Yam”. This system was well-organized and also consisted of official riders who often travel as far as 200 miles a day to deliver parcels and messages. The advantages of this system were the ease at which goods and information travel with speed and how the Genghis Khan could easily keep abreast of military and political developments and maintain contact with his spies and scouts. The service also helped protect foreign dignitaries and merchants during their travels.

3. No One Still Knows Exactly What He Looks Like

Despite his influential and famous figure, the Khan lived a very secretive and low profile life. No one had much knowledge of his personal life or even his appearance. No sculptures or portraits of him are available neither are there any concrete information from historians. The only description we have of him is that he was tall and strong with a flowing long hair and long bushy beard.  Some legend says he has red hair and green eyes. But these accounts are also questionable.

Although historians have now adopted some of these vague and uncertain descriptions of the Genghis Khan in the real sense, no one is 100% certain of just how he looks.

2 He Had a Rough Childhood

Some historians claim that he was born holding a blood cloth in his hand. This may have been pointers to the bloodthirsty life he grew into as a ruler.

Raised up in a barbaric manner, Genghis was forced to contend with the brutality of life on the Mongolian Steppe. His father was poisoned when he was nine, and his family was later banished from the tribe. This resulted in him, his mother and five other siblings struggling to fend for themselves. To survive, Genghis had to begin hunting and foraging. Some say his childhood experiences were responsible for his brutality and manner of living. Despite the hardships, he became a leader and a warrior at an early age. His crude knowledge of politics brought his alliances with the heads of other tribes

1 ULTIMATE SHOCKER: HIS REAL NAME WAS NOT GENGHIS

Another incredible bomb is the fact that he was originally named Temujin meaning iron. He was named after a Tatar chieftain that his father had captured. The horrific name, “Genghis Kahn”  was given to him when he became the leader of the Mongols in 1206. The meaning of Genghis is still not known, but Khan is a title for a prominent leader. He won the confidence of all the tribes and clans in Mongolia that he would further the interests of the people and the empire. He also initiated military and economic reforms that helped in the expansion of the army and the surge in trade,

How to Drastically Improve your Creativity Skills

Learn How to Write a Proper Business Plan

Why Most Businesses Fail (How to Avoid Failure)

0 thoughts on “10 Shocking Facts About the Genghis Khan”